Using a migration agent took away all the hassle 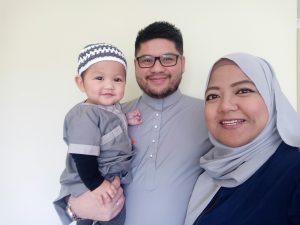 Deciding to move to the same country as your partner and leaving an established career and loved ones behind can be extremely hard.

Once you’ve made that choice, you need to ensure you can legally stay in that country long-term. In Australia permanent residency can open-up a range of possibilities including Medicare benefits and job opportunities.

Those were the main reasons why Siti Zulaikha wanted to secure her permanent residency after she married Jason, an Australian in 2015.

‘Using a migration agent took away all the hassle’

Love story from Penang to Perth

Their story starts when they met in 2010 in Penang, Malaysia’s second smallest state.

“I was working at the reception of a major hotel which Jason used to visit regularly. He was the hotel customer that always complained, and I was the one on reception who used to sort things out,” Siti explains.

Their exchanges developed into friendly banter and the two of them started dating. Jason’s permanent base was Perth, his mother is Australian and his dad Chinese Penang. The distance meant they would often meet half-way in Bali, Korea or Japan. Five years into their relationship they decided to get married.

“It sounds weird, but although we got married, I didn’t move to Australia immediately. My career made me hesitant to move as I had a job I really loved. I come from a large family and they were supportive of any decision I made about moving to another country.”

After eighteen months and wanting to start a family, Siti decided the time was right to cross continents.

The first step was to secure a permanent partner visa and Jason decided to find an agent rather than do it themselves. He scoured online reviews and took advice from friends before engaging Fizah’s services.

“We decided to enlist Fizah’s help as we are time poor and thank goodness we did! Towards the latter stages of the lodgement, life got busy, I fell pregnant and had horrendous morning sickness. On top of that we moved to a new house, and then our home got broken into, but Fizah was the voice of calm and reason throughout everything,” explains Siti.

Once the couple’s son had arrived, Siti realised it made sense for her to move forward to the next stage and to become a permanent resident.

“I wanted to have similar rights to my son, to enjoy the benefits of health cover with Medicare and to give reassurance to my employer that I was here for the long term,” says Siti.

“It was an obvious choice to use Fizah again because we knew from experience, she would be by our side throughout the journey. She is so easy to get hold of, we could contact her by text, email or phone and was efficient, providing us with regular updates.”

“I was worried I might be called for interview but no, it was all smooth. Fizah had done her job so efficiently nothing further was required.”

Fizah phoned them on a Saturday to confirm the residency application had been successful and had taken just six months. So, what advice would Siti give to others in a similar position?

“I’d definitely use a migration agent you’d be foolish not to. My husband starts work at 4am in the morning, we have a toddler and I’m working shifts in a hotel, so for us we wanted simplicity. Using an agent is not that expensive and it takes the pressure off you. Being with your family is time which is far better spent than filling in paperwork.”