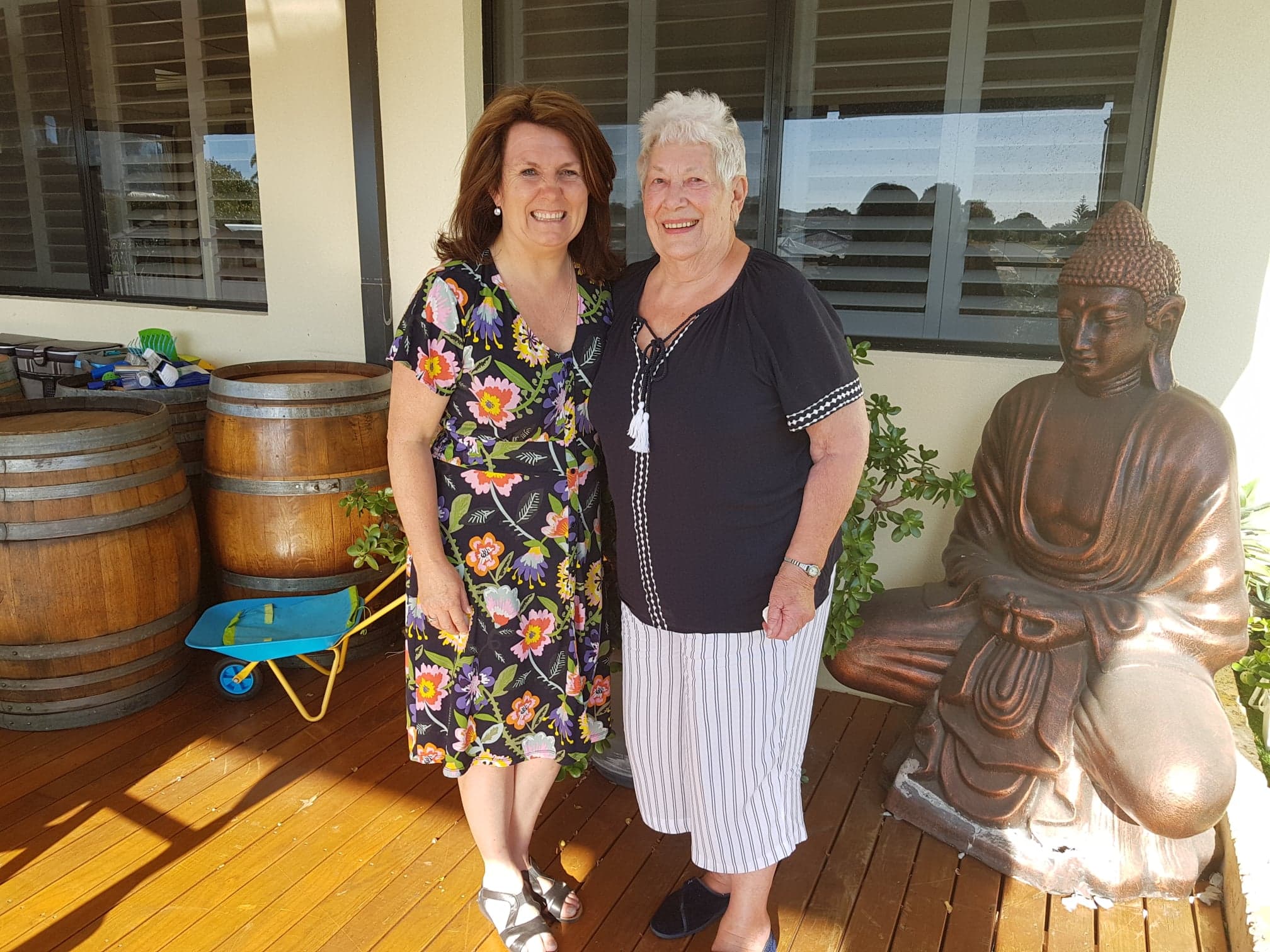 86-year-old Betty from Essex in England wanted to stay long-term in Australia with her daughter Sharon. We were able to help her achieve this goal through a tailored approach.

Sharon has siblings in England which ruled some Aged Parent visas out for Betty.

Betty is hard of hearing, so we arranged face-to-face appointments when Sharon was there as well. We were able to build up a picture of why Betty wanted to stay in Australia for good and worked hard to achieve the best outcome. It was important that we liaised with both of them. Betty would sign the documentation, but it was Sharon who was always the first point of contact.

‘’Zahirah and Fizah came to visit us and it was as if they were family. They were empathetic towards our situation, and were able to explain the process very clearly; that meant a lot to my mother who is hard of hearing,’’ Sharon explains.

Betty’s daughter, Sharon, her husband Roger and their three children moved out to Australia in 2003.

‘’At that time the exchange rate really worked in our favour, so we knew we’d be able to take our time to decide what we wanted to do work wise and where to put down roots. The thought of living in a better climate appealed to us and my husband knew he could easily find work‘’, explains Sharon.

Soon after they landed, Sharon’s mother and father, Betty and Arthur, came for a holiday.

‘’They fell in love with WA and were drawn to live here as well. They went house hunting and found a villa they liked in Mindarie. They put an offer in and came really close to buying it. At the last minute they lost the villa to someone else and with it the urge to move to Australia,’’ Sharon adds.

Life in England without her husband

Over the next ten years, Betty and Arthur would visit Sharon and her family every eighteen months or so. In 2014 Arthur was diagnosed with stage four cancer and passed away in 2015.

‘’We’d met when we were 15, so it was a huge blow when he died because he was the love of my life,’’ explains Betty.

Betty remained in Harwich in Essex, but felt lonely without him. She also had health problems with her heart as well as undergoing knee surgery.

“Living on my own was expensive, my money didn’t seem to last. I’d been estranged from my son for many years. Although I had a daughter living close by, she would go away at weekends to visit her children. During the week she had a full-time job, so I didn’t have much company.’’

Moving to WA, backtracking and returning to England

In September 2017 Betty sold her home and moved to Australia on a three-month tourist visa. Sharon had been doing some research and was hoping that she could prolong her stay more permanently.

‘’I arrived, and we managed to extend the visa from three months to a year. Unfortunately, I had a nasty fall and ended up in hospital for ten days. The upshot of that was staying in Australia longer and this was permitted on a medical treatment visa.’’

Just ahead of her two-year anniversary, Betty announced she wanted to go back to England.

‘’I missed seeing my grandchildren and my friends. My daughter in England promised me that if I returned, she’d work part-time and that I could live with her. By this stage I was using a walking frame, so it seemed to me to be a good solution,’’ Betty explains.

It didn’t work out as planned. Her daughter was away from the house for long periods. Betty was paying a lot of rent to her daughter and most of her friends had passed away.

Back to WA – this time for good

The reality was that she was miserable. It came to a head with a disagreement with her daughter. After two months of living back to England Betty made plans to move back to Australia and three weeks later was back here for good.

Meanwhile, in Australia Sharon had been reading up on visas and was aware of a new Sponsored Parent (Temporary) visa subclass 870. Once again, Betty arrived on a tourist visa. Sharon contacted us after seeing an advertisement in a local newspaper as she wanted to learn more about this sponsored visa.

Migration agent Fizah explained more about the Sponsored Parent (Temporary) visa subclass 870 and how it suited their circumstances.

We went to great lengths to ensure this visa would attract a successful outcome. Normally it should be lodged offshore, but because of COVID and Betty’s compelling circumstances, we made a special request asking for the visa to be allowed to be submitted with Betty still in Australia.

The sponsorship application for Roger and Sharon, was lodged at the end of June and it was approved 10 days later.

The Sponsored Parent (Temporary) visa itself was submitted at the start of September and that application was approved 6 weeks later, after Betty successfully completed her visa medical check and supplied police clearance certificates for Australia and UK.

‘’I don’t mind admitting that I cried when I was told I could stay. I’m here on a three-year visa which can be extended to ten-years.’’

Sharon is pleased to have Betty living with them and the arrangement works well.

‘’I’m a home bird, so I’ll play cards or do a puzzle. We’re not under each other’s feet all the time, even though we’re in the same house. My grandchildren call in often and I see my two great grandchildren every week which brings me so much joy. I just like the simple things in life and being with family.’’

Sharon is philosophical about her mum’s journey to securing a visa.

‘’She needed to go back to England to get it out of her system and to know which side of the world she should make her permanent home. We love having her here and are very grateful to Home of Visas who helped to make it possible.’’ 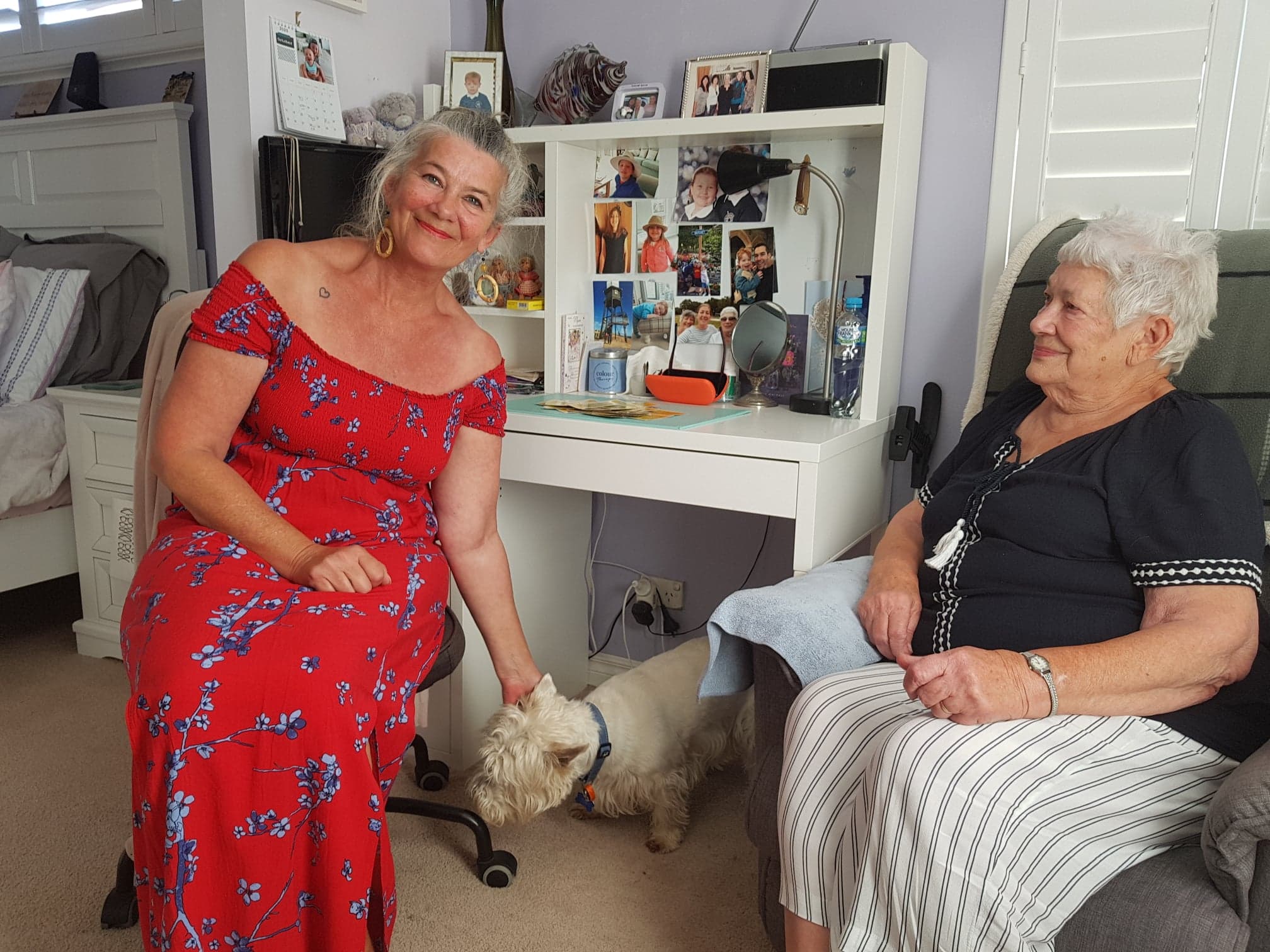 If you want to be reunited with an elderly parent in Australia, come and talk to us. Now is a good time to explore available visa pathways, especially if your loved ones are already here on visitor visas. COVID and the lockdown of countries have opened up more options.

Our aim at Home of Visas is to make the process simple. We can drive the process for you, saving you time and giving you peace of mind. Interested? Then get in touch and take advantage of a free discovery call today.