We secured Australian citizenship at 79 and 81-years-old, during
the lockdown 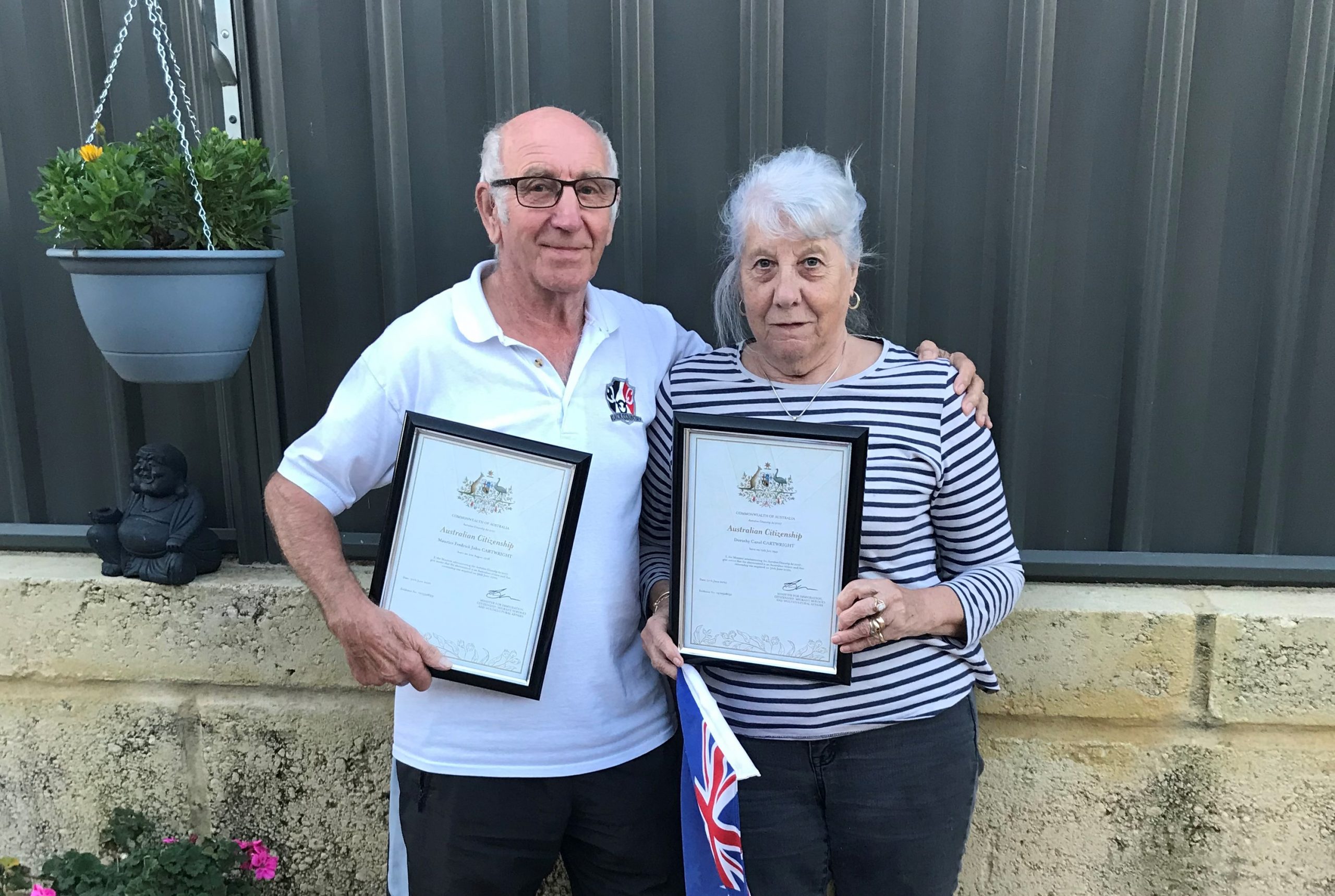 There are still ways that you can secure Australian permanent residency and citizenship when you are much older. In fact it’s probably more common than you think, especially if you have connections or relatives who can sponsor you.

That was the case for Fred and Dorothy who are now great-grandparents and moved to Perth eight years ago when they were aged in their seventies. We successfully lodged their citizenship application for them when they were 79 and 81-years-old.

“You never wake up to freezing temperatures, the sun’s out all the time and it makes peoplehappier,” explains Fred.

Moving to Perth as seniors

Fred and Dorothy Cartwright, originally from Dudley in England, decided to move to Australia because of their son, Simon, who’s a bricklayer. An economic downturn in England in 2012 had led Simon to consider Australia for job opportunities.

‘’Simon, came here on a sponsored visa at a time when the mining industry was in full swing. We had a holiday here to see if we liked it, which we did, so we decided to join him on a parent’s visa’’, explains Dorothy. The couple’s other son stayed behind in England and while they naturally missed being able to visit him regularly, Dorothy and Fred soon eased themselves into Perth’s laid back life-style.

Living as an extended family

Dorothy and Fred, Simon, and his wife Julie, all lived together in their home in the northern suburbs. Two years after they landed, their grandchildren Luke and Scott moved across to Perth from England as well. “Once we became permanent residents, we bought a place in Yanchep and Simon and Julie got a house in Clarkson,” Dorothy says.

Unfortunately, the plan to have everyone together in Perth long-term didn’t last. “Simon and Julie moved back to England. The mining and resource downturn meant our son struggled to pick up work and also his wife became unwell. Naturally we were disappointed; one of our grandson’s has also gone back but Luke, our other grandson is still here,’’ she adds.

As soon as the couple became eligible to become citizens, they decided to download the application form online.
“You never know if Australia will change the migration laws. We knew that becoming citizens would offer us extra security which is reassuring at our age,’’ Fred explains. Luke, their grandson, offered to help them to complete the application.

‘’When we looked at what needed to be done, we were staggered. The application form was very long and detailed. There were over 80 pages, we could see it was going to be time consuming to complete.’’ As luck would have it, at around the same time, Dorothy and Fred spotted an advertisement in the local paper for Home of Visas.

“We contacted Home of Visas and they couldn’t have been more helpful. Zahirah and Fizah came to visit us twice at our home. They worked in such a methodical way, told us the documents and details they required and then submitted our application,” Dorothy explains.

“It also alleviated any stress, because they are the experts. We couldn’t thank them enough and I
highly expect our grandson to use their services when it’s his turn to become a citizen.”

The couple’s age meant they didn’t have to complete the citizenship test. Dorothy did, however, buy a book on Australia so she could learn about traditions and the history of the country. Their citizenship ceremony was online because of the COVID lock down. ‘’We completed the pledge via Zoom! Although the ceremony was over the internet, I had my family, my grandson Luke and his wife with me, but it was a bit weird.’’

So, now they have citizenship, what do they have planned for the future? ‘’Well last year our great-grandson got married in Thailand and it’s given us the bug to travel. Once borders are opened we’d like to explore Sydney and the Gold Coast. We are very lucky to live in this country and very grateful to Home of Visas for making our citizenship dream possible.’’

Whether you’re young or old, we can submit your Australian citizenship application, leaving you to enjoy the things that matter most. Our priority is delivering an exceptional level of service. Take a look at our testimonials and you’ll understand why we’re fast becoming the migration agency of choice in Perth.